Once again this one will contain spoilers and profanity.  This is your one chance to save yourself from a terrible Manga ending that I have graciously stepped on for you.  I jumped on this shit grenade unsuspectingly, but here I am (reliving it) to arm you with the knowledge needed to avoid the ever-loving-fuck out of it (see profanity).  So if you’re reading/about to read this manga, or if you’re Amish avert thine eyes good man!  Wait if you’re Amish what are you doing on a computer?  BLASPHEMY!  Anyway while the rest of you persecute the technological sinner allow me to introduce, for the few remaining, this piece of crap…

Is This Girl For Real?! 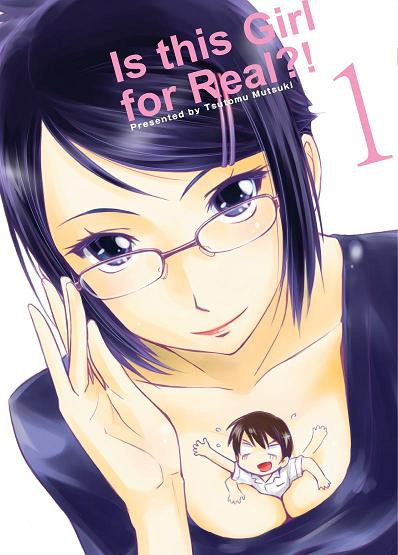 I can already hear my better read manga followers, yes all one of you, saying, “This manga wasn’t THAT bad.”  To be fair no this series wasn’t the train wreck Sheishun Pop (ugh) was however, we’re here to talk about bad endings in case you forgot.  Yes “Is This Girl for Real?” was actually a decently funny story all things considered, and given a different ending this might have ended up as a recommendation.  Alas the mangaka for whatever reason decided to end the manga, and did so in the most fuck-rushed way possible.  Still there was quite a bit to it before the crap end, so let’s cover that.

This manga’s story centers on Jun Yoshikawa, a perfect high school student and son.  One night this kid decides to help out a drunk girl out and she end up spending the night at his house (perfectly normal).  This girl (Narumi Kawase) is hired as the assistant for Jun’s mangaka mother, despite having no manga drawing skills (still normal).  From then on Narumi lived and worked as a mangaka assistant to Jun’s mom.  Jun finds himself under scrutiny at school when everyone finds out that he’s living with an older (28) woman.  This is compounded by the fact that Narumi CAN NOT hold her alcohol and frequently uses Jun as her “body pillow” when drunk.

That’s most of the story in a nutshell.  Both Jun and Narumi have people that like them, there are even two that like them in a homosexual way.  It’s a very typical romatic comedy type manga with very little in the way of definitive action being taken.  Still I enjoy this kind of ridiculous, “Oh look I tripped right into your exposed cleavage” kind of comedy, and I’d have been happy to see it continue in this manner.  It was a simple story that was a light fun read.  Then came the ending…

In a stunning rush to an ending, the mangaka (Tsutomu Mutsuki) quickly tied up every “loose” end.  When I say rushed I mean that in the last few chapters they were throwing out storylines like they were taking on water.  Some of these ended in the most insulting way to the readers intelligence as well.  For example the gay guy who liked Jun suddenly turns straight after sleeping with Narumi’s sister and getting her pregnant.  FUCKING REALLY?!?  Is that how homosexuality works in Japan?  You can just fuck it away?  The lesbian girl who was into Narumi starts digging a guy that was after Narumi as well, because they have SO much in common I guess (sarcasm level > 9000).

After this I could use a beer myself.

The “school yard” romances tie up pretty quickly too, with Jun starting a relationship with Ririko (his childhood friend).  As the final chapter started coming to a close I was already annoyed, but I didn’t think it was the last chapter. This was because we got NO CLOSURE for Narumi.  She’s still a shitty manga artist, still single, still a virgin, and still just hanging around the Yoshikawa house.  No prospects for the future and nothing to tide the reader over.  Just a last shot of her drinking a beer and everyone freaking out at her shitty alcohol tolerance (see above image).  This kind of writing negligence was what spurred my anger at this series.  I spent five volumes on this god damn series for the story to be dropped like a large shit after a Taco Bell bender!

The answer to “Should I read it?”

So there you have it. Not the worst series, but an ending that ruins the whole damned thing.  It’s a shame too since it had some potential, and I think it could have been an anime as well.  Alas it’s now only “that manga I pretend not to see in Crunchyroll’s manga selection”.  Well one of the manga I pretend not to see anymore, but that’s a story for the next rant.  Drop me a line if you can guess what the next one will be, or if you want to know more about this one.  I’ll admit I skimmed a bit on this one, but there was quite a bit to cover.  After that, I could use a beer…