I love my PS Vita.  I might be the only one in a 20 mile radius with one, but I love that damn thing.  The exclusive game library may not be the biggest, but the features/apps/cache of old games more than makes up for it in my mind.  The ability to play Japanese games, and watch Crunchyroll on the fly make it my system of choice.  One of the first games I fell in love with for my Vita was… 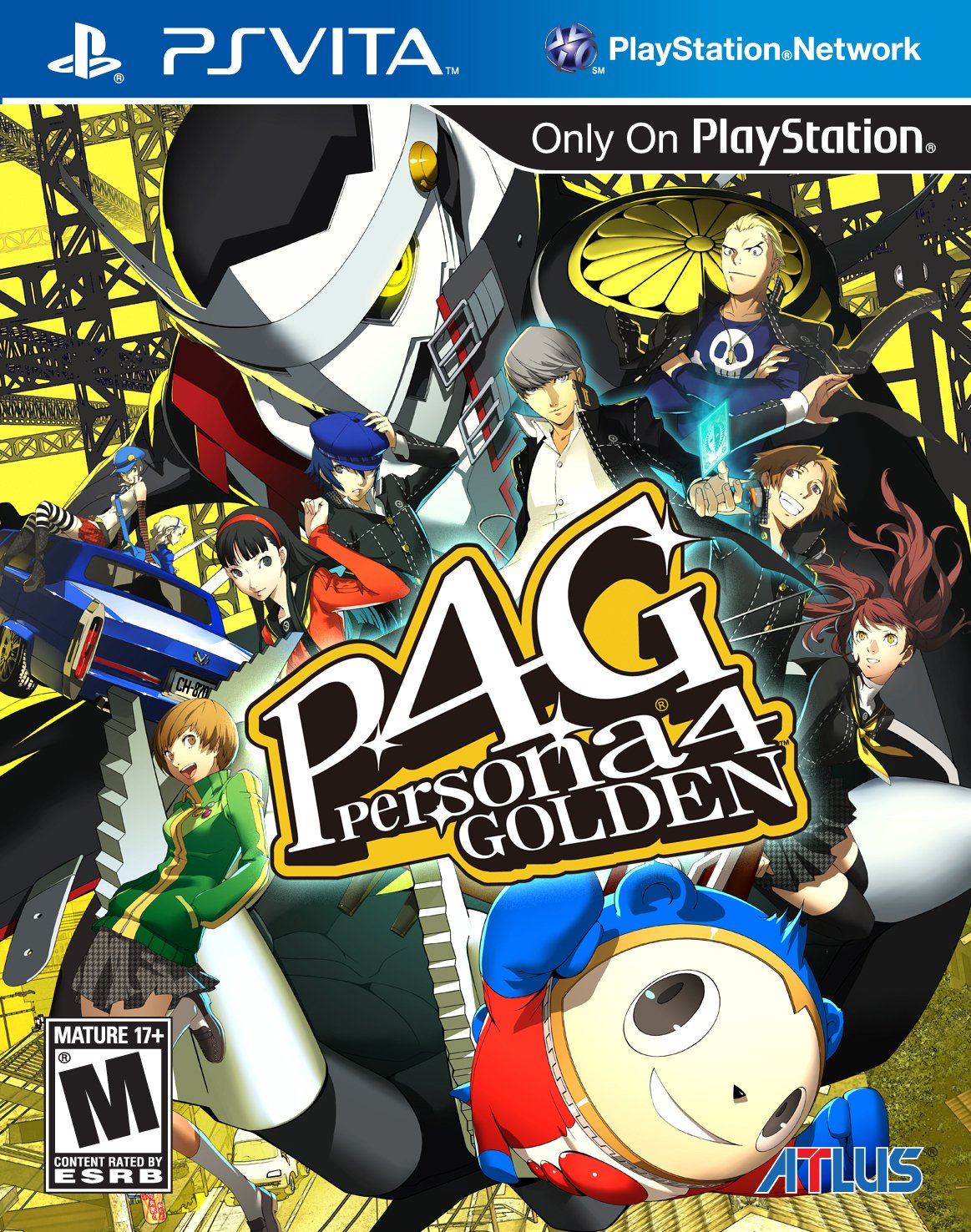 A must play for Vita owners.

I am well aware that Persona 4 came out first on the PS2, so that’s why I specified the Vita version “Persona 4 Golden”.  I never played the first iteration of the game, because it came out when I was in the military. For that reason I am immensely grateful to ATLUS for bringing this incredible J-RPG to my handheld device.  While this wasn’t my first foray into the world of Persona, it is definitely my favorite so far!

Did I mention it’s a Japanese game?

The actual game play and combat system aren’t terribly different from a traditional J-RPG’s, the difference for this one is largely in the story.  Plot drives everything in this game including how far you can level up in certain aspects.  In order to acquire higher level Personas you must first increase your relationships throughout the town.  This might sound boring, but you find yourself as engrossed in the main character’s day-to-day life as you do in the boss fights.  The game takes place over a year (Spring 2011 – Spring 2012), and in between dungeon crawling sessions you have to set aside time to spend with friends and family. 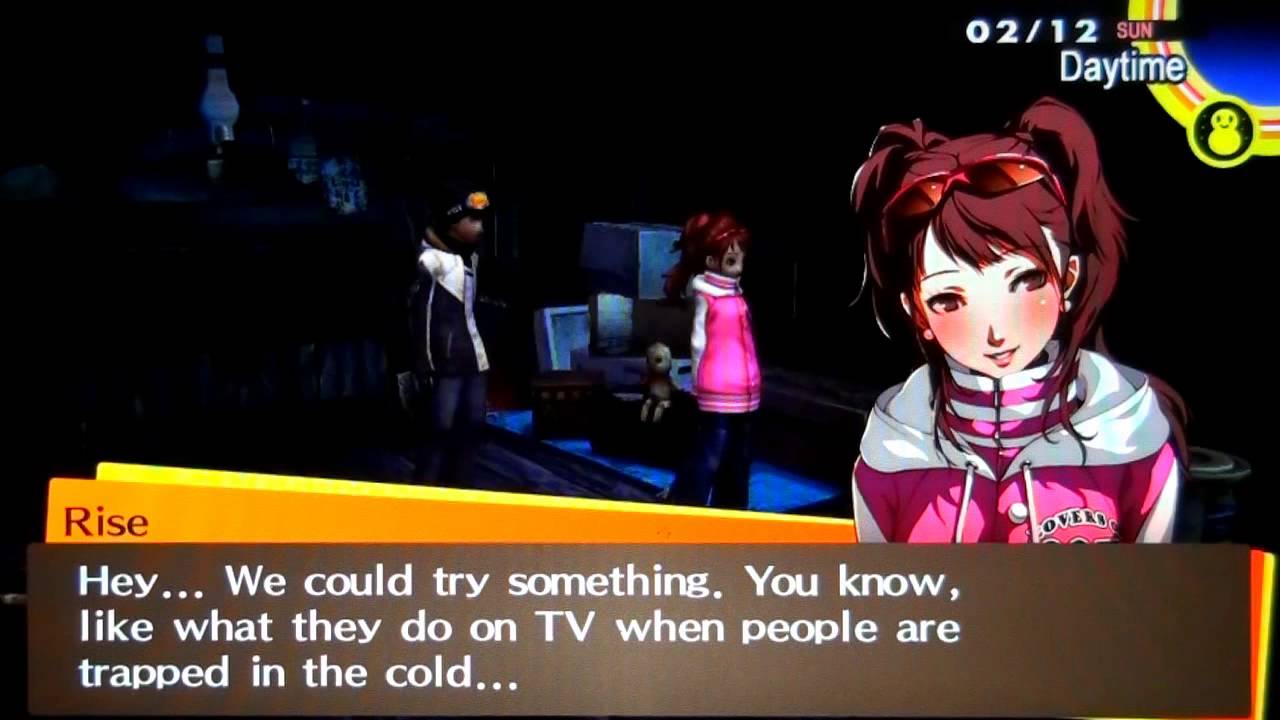 Persona 4 Golden’s story begins with the main character moving from Tokyo to the country town of Inaba.  The main character is unnamed in the game, but for the sake of this post I’ll use the name he has in the anime (Yu Narukami).  Yu gets to his new home with his uncle and adorable cousin (Nanako), and starts out a normal life in high school.  After a TV announcer’s body is found in Inaba, the small country town becomes a hotbed of suspicion.  Soon after a local girl goes missing and a rumor about a mysterious “midnight channel” starts to go around the school. Not your typical midnight channel.

When Yu and his new friend Yosuke view this midnight channel they can see the missing girl inside!  What’s more they realize that they can enter the world of this mysterious channel through the TV screen.  Chie joins the duo and the three meet a strange bear (Teddie) on the other side who warnes of shadows that will attack humans.  From here on the gang grows with every person rescued from the strange TV world.  The question the team must answer is, “Who is kidnapping people and throwing them into this other world?” Department store TVs are easier to get into.

Again where this game shines is in it’s story.  Each person shoved into the TV has to confront the ugly side of their personality.  Fear, jealousy, and malice are some of what their shadow-selves are made of, and only by accepting their failings will they be pacified.  It’s an odd bit of introspection from Japan who traditionally shun the notion of bringing ones shortcomings to light.  Even more surprising coming from Japan is that one of these shadows is of a character’s latent homosexuality, while another deals with a girl’s gender confusion.  Overall this aspect is what really drew me in, and endeared me to all the characters.  The game seems to say, “Many of the problems you face mentally can be addressed through deep self-analysis”.  That is a message I can get behind.

You need more Rise Kujikawa in your life.

If you don’t own a Vita it’s understandable if you haven’t played P4G, but if you still have your old PS2 maybe you can find a copy of the original out there.  On the other hand  you could watch the Person 4 Golden anime too if you can’t play the game!  If you’ve already played it and your on your millionth re-play through (like me), let me know what you think of it.  Am I right, or am I right about this fantastic J-RPG? Let me know in the comments or on social media where you stand, and whether or not you’re looking forward to the rhythm game or Persona 5.  Now if you’ll excuse me, I need to play some Persona 4 Golden.  Till next we meet or whenever I finish Rise’s dungeon…