In terms of eSports it doesn’t get much bigger than League of Legends.  In just a few short years they moved their tournaments from relatively well attended events to the packed stadiums they are in today.  The last world championship (Worlds for short) was held across Europe, with the final matches being played in the Mercedes-Benz Arena in Berlin!  The tournaments around the world are broadcast from streaming services for free, and it seems that there is hardly a month that goes by without the excitement of League of Legends action to watch on your computer.  I myself will be attending Intel Extreme Masters San Jose this month, and I must say that I’m very excited to being going again this year!  This being an otaku/cultural blog though, I wanted to draw attention to a little known region that has just (within the past year) appeared on the professional League of Legends map.

That’s right eSports fans, for the first time in professional League of Legends history Japan has a league of its own.  Two splits (periods of play) have already transpired in the LJL, culminating in one team representing Japan in the International Wildcard (IWC) tournament in Turkey.  Unfortunately the team that went for Japan (DetonatioN FocusMe) came in last out of the four teams in the tournament.  Still the team was able to take two games of the round-robin tournament, including a game against the Bangkok Titans who ended up winning the tournament.  With another year or two under their belts it’s not outside the realm of possibility for this fledgling region to find itself on the world stage.  Now whether or not they go far from there is debatable, but it would still be a tremendous achievement when other regions still struggle to make it in.

Adding to the reasons for optimism about the new Japanese league is the announcement that Japan will finally receive it’s own server.  For those that don’t understand what this means, allow me to elaborate.  League of Legends is run from servers set up in specific regions throughout the world.  Your proximity to the server dictates how good or bad your ping is. Basically the farther away you are, the higher your ping is, and the slower the game react to your commands.  For years the Japanese players have been relegated to using other regions servers, driving up their ping and possibly stifling interest in potential pro-gamers.  This isn’t to say that players haven’t gotten to Challenger (highest in game rank) in other regions before, but the addition of their own server will allow Japanese pro’s to work on their in game mechanics without much worry of lag spikes.

Anyone looking for an eSports job in Japan?

This new server will come complete with Japanese voices for all 128 (so far) characters in the game.  This is further hyped by the names that Riot Games (or their Japanese affiliates) have aquired to voice their champions.  Seiyuu’s (voice actors) like Uesaka Sumire (Dekomori from Chū-2), and Yuuki Aoi (Madoka from Madoka Magica) will be adding their amazing talent to the roster of League of Legends.  Personally I’m most excited that Kugimiya Rie (Taiga from Toradora) will be the voice of Annie, as her unique voice will suite the 8 year old fire mage well!  Hopefully a voice pack will be available to download, otherwise I might just make a Japanese account to hear all the character voices.  You have to wonder if they’ll change Rammus or Reksai at all, as one says very little and the other just growls.  Either way here’s a video of the making of the Japanese League of Legends client in progress.

Back on the topic of professional League of Legends in Japan, the League is pretty small compared to the other regions.  There are only six teams currently in the LJL, and for the first two seasons DetonatioN FocusMe looked the most dominant in the league winning the first split in the 2015 season.  They did take second place in the second season when they lost to Ozone Rampage, but in the grand finals they won the right to represent Japan in the IWC.  Other teams have been able to challenge DFM’s dominence (7th Heaven, RabbitFive), but when the chips are down you can’t count them out.  Only time will tell if DFM will become the next regional power house (see: SKT, TSM, Fnatic), but as of now they are certainly Japan’s strongest contenders.  This is made especially true by the fact that they are now the only team in Japan with experience in international tournaments.

Japan’s best? Stick around and find out!

The prize pool for both splits of the LJL is all together two million Yen split between the first through third place teams.  While this may sound like a huge sum of money, that’s roughly a $16435 USD.  This is a fairly small prize pool compared to other regions, however a couple of factors need to be taken into account on this.  First and foremost this is a very new region, and as such there was probably a decent chance that the small prize pool was partially out of fear that the league would not be very successful.  The second issue is that the Japanese Yen isn’t exactly in the best shape right now, as Japan is slowly climbing out of a recession.  Finding investors in those condition could be like navigating a minefield of financial ruin.  The third and final issue that was holding back the LJL was the preconceived notion that Japan only enjoys console and mobile games.  This last one really couldn’t be farther from the truth.

Though they do enjoy them some fighting games.

Sure there are a great number of fighting game fans in Japan, and the arcade scene there is bigger than any in the world.  To say that there isn’t a market there though is to discount niche markets and potential fans all together.  Take 80’s – 90’s anime fandom in the west for example.  Had no one in Japan seen the potential of niche markets in countries like the USA, then we might never have had companies like Funimation, Aniplex of America, or Sentai Filworks!  Plus as Sky Williams has said before, “LCS is simply inspiring“, all it takes is for enough people to watch the LJL to garner interest in the game.  Trust me you’re reading the blog of someone who’s League interest was rekindled by discovering the pro scene.  The only way to ensure a game like League of Legends thrives in a new region is to engage the youth and young adults of the culture, and eSports is a great catalyst for that. 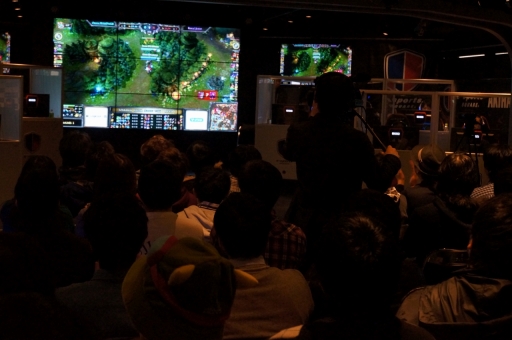 At the end of the day it’s still a very new region in the pro circuit, and there will definitely be growing pains.  I fave a feeling that his region won’t be going away anytime soon though.  The first two splits of their first year as a region saw the eSports Square studio in Akihabara sold out often, and with a Japanese server I’m sure the demand for a larger venue will rise.  It’s exciting to witness a new region sprout up for one of my favorite games, but doubly so for a region that produces one of my favorite entertainment mediums.  I’ll be keeping a close eye on the development of this fledgling pro scene, and I encourage all fans of Japan and League of Legends to do the same!

The oppai mouse pad giveaway is still live, and can be found here!  Simply scroll to the bottom, read over the rules, and comment to enter to win.  Offer valid through 11/11/15, limit one entry per person please.