*Warning* The review itself will be spoiler free, but below my score there will be a spoiler filled breakdown of my thoughts about certain aspects of this game. If you have not played Life is Strange to completion, please don’t read that part of this article! Go play the game, then come back and let me know what you think!

As of this writing, it has been two days since I completed the extraordinary game that is Life is Strange.  I just can’t get it out of my head!  The concept itself is not necessarily a novel one; a story about time travel and saving the world.  Yet, what Dontnod Entertainment is able to do in their telling of this story is incredible.  Masterful writing and storytelling, coupled with the beautiful visuals and a soundtrack that nails the atmosphere at every turn, made Life is Strange the most into a video game I have been for a long, long time.

Our protagonist, Max Caulfield, discovers that she has the ability to rewind time after she bears witness to an awful incident at her school, Blackwell Academy, in a small Oregon fishing town called Arcadia Bay.  Using these powers, you make decisions over the course of the five chapters of this story, in the hopes of making things right in the world again.  The ability comes at a cost, though it may not be apparent at first.

Life is Strange is an adventure game with lots of puzzles that require you to utilize your ability to rewind time.  It’s also a game about choice and consequence.  You are constantly reminded that many of the decisions that you make in this game will have consequences later on in the story, for better or worse.  Every time that I saw that little butterfly in the top left corner of my monitor I would get nervous and think about utilizing my ability to rewind time to change the choice I made.  Every time the game presented me with a choice that I knew would have large repercussions, I sat there for minutes trying to think of every possible consequence for each option.  Life is Strange made me think, which is not something that I can say a lot of other games have made me do. 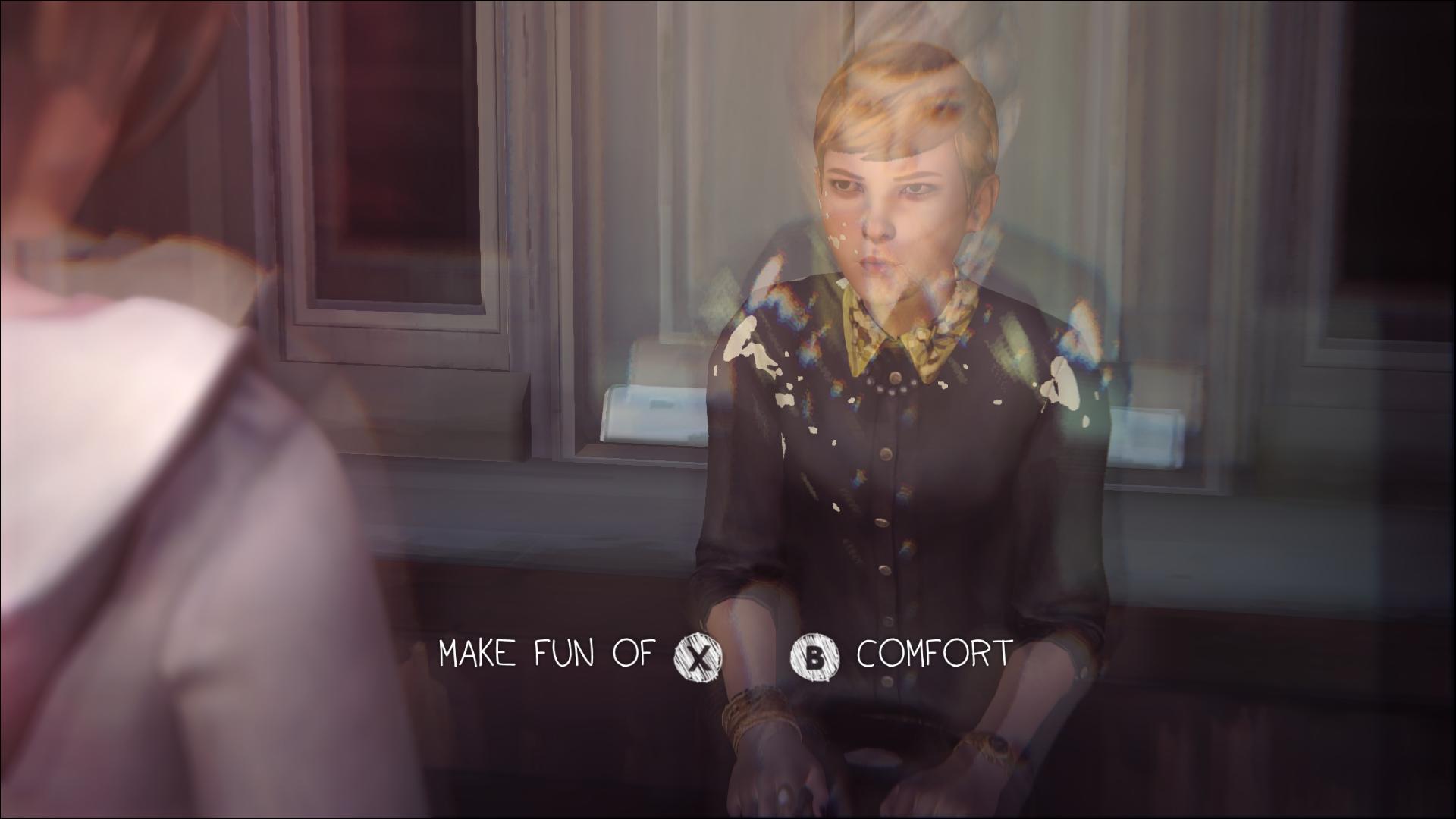 Thematically, Life is Strange tackles topics that are uncommon for games to approach.  A big one early on is the topic of bullying and the effects that it can have on not only the person being bullied, but the bully themselves, as well as the surrounding community.  It’s not an easy topic to dive into, but Life is Strange does it in a way that is impactful and heartbreaking, while remaining tactful.

That’s not to say that Life is Strange is without some faults.  The character animations are stiff and the lip-syncing is not always great.  I encountered a couple of bugs while transitioning between scenes that left me at a black screen indefinitely.  I was able to fix those moments by reloading the last checkpoint, which is never a big issue as this game auto-saves constantly.  My biggest issue, though, lies within the culmination of the narrative.  I’ll dive deeper into that down below, but to keep it spoiler-free, the ending felt lackluster when compared to many of the outstanding moments of the game, with a payoff that wasn’t entirely satisfying.

Despite those issues though, the highs of this game vastly outweigh the lows.  While the end of Chapter 5 left me wanting, the rest of the chapter ends were phenomenal cliffhangers.  The overall story is great, the soundtrack is perfect, the art is beautiful, and the emotion that Life is Strange evoked out of me was raw.

Had I played this game last year, when it was released, it would have easily taken the number one spot on my list of favorite games of 2015 and as it sits now, it is easily in my favorite game that I have played this year.   It’s a masterpiece, albeit a flawed one, but a masterpiece nonetheless.  Please, do yourself a favor and play this game.  It’s only $20 on consoles and steam and is worth every penny.

I’m going into some of the meatier parts of the game here!  If you don’t want anything spoiled, do not click below! 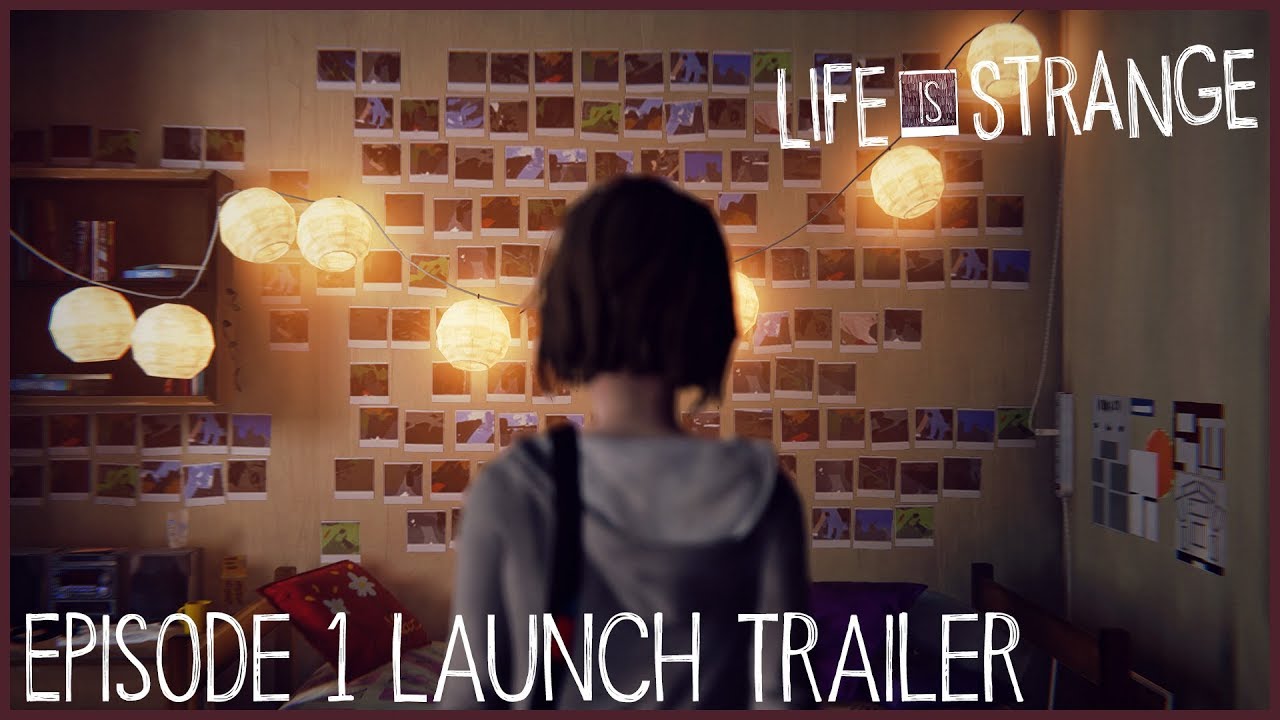 Let’s start off with the most disappointing part of this game for me: the ending.  For a game that puts so much emphasis into choice, to have it come down to two decisions, neither of which are very appealing, is almost criminal.  It’s reminiscent of the ending off Mass Effect 3, which I was not a fan of either.  The choice that I ended up making was to sacrifice Arcadia Bay.  I did not go through all of that crap, all of those heart wrenching decisions, all of that anxiety about whether I made the right decision or not, just to see Chloe die.  So I sacrificed the town. And like the game was punishing me for making such a selfish decision, that ending was nothing but confusing and unsatisfying.

We get no explanation about the aftermath of the tornado that laid waste to Arcadia Bay, no glimpse into what happened to all of the characters that you spent the last five chapters going through hell with, no look at what happens to Jefferson, nothing.  We get Chloe and Max driving through the destroyed town without talking, then smiling before driving south.

What makes this ending even more frustrating is seeing the treatment that the end where you decide to sacrifice Chloe gets.  I went back to that last decision and made that choice to sacrifice Chloe for the better good, and while that ending still leaves a lot to the imagination, it is impactful and poignant.  When we sacrifice Chloe, we get to see the consequences of that decision by listening to her get shot and seeing the aftermath and attending her funeral that David and Joyce break down at.  It makes you feel the weight of your decision, and while it still could have been done better, I appreciate what it did present.

I want to know exactly what my decision to let Arcadia Bay be swallowed up by that massive tornado resulted in.  Does Warren survive in the Two Whales Diner with Joyce and Frank?  Or will their bodies be found amid the rubble and destruction?  Does Blackwell get affected by the tornado?  What happens to Dana, Taylor, Brooke, Kate and the rest of the students?  We’ll never know because there isn’t even a hint!

For as frustrating and disappointing as the ending is, that is not its defining feature.  Now that I’ve vented out my frustrations, lets get down to the nitty gritty that makes me give this game top marks!

While in the choices that you make over the length of the game have no real significant meaning to the end of chapter five, seeing the choices that you make actually have an impact, is pretty freaking cool.  For me, this is no clearer than at the end of chapter two when Kate Marsh is prepared to jump off the roof and end her life.  If I had made one choice differently, I don’t know if I would have been able to talk her off of that ledge, but seeing dialogue options appear because I read a card from her dad telling her he loved her and because I looked at a picture of her sisters, that was pretty rad.  The tension was so real and when she finally hopped off the ledge and into Max’s arms, I was able to let the breath I had been unconsciously holding in, go. 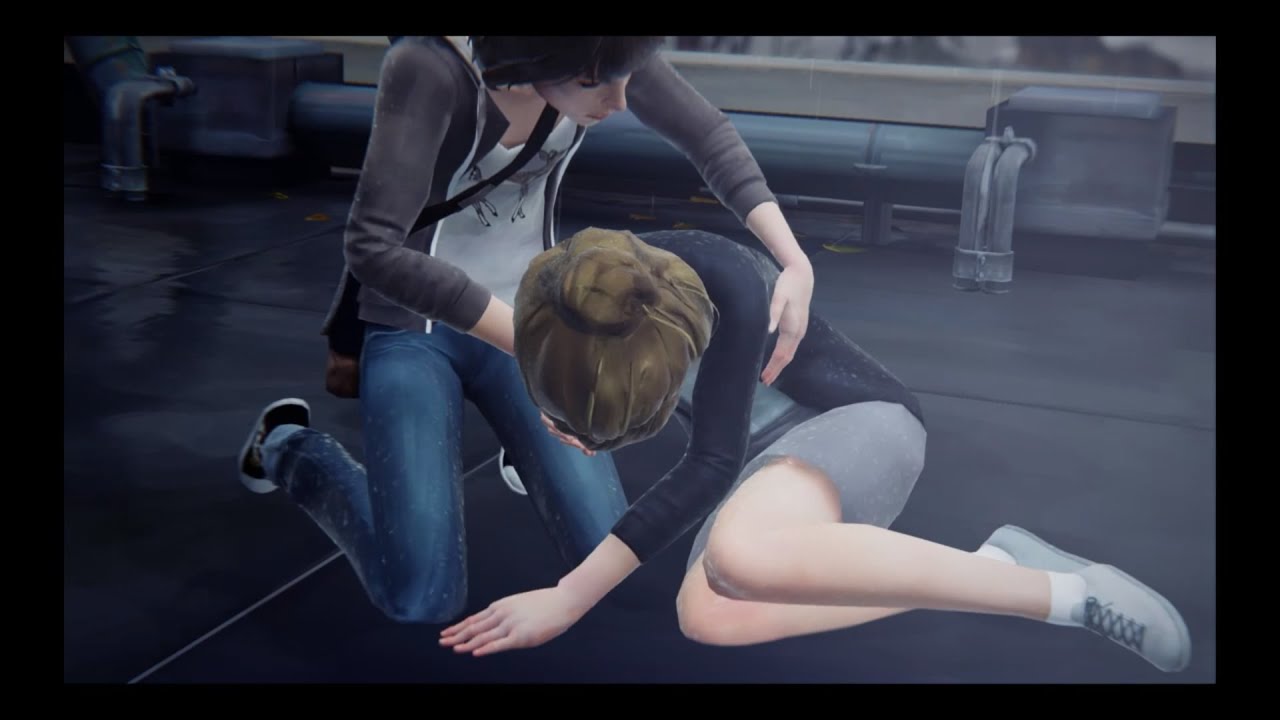 On the flipside of that exhilaration, was the stomach dropping anguish of seeing Chloe roll up to the door in that wheel chair at the end of chapter 3, all because you saved her dad from dying.  The struggle of Max having to go back and let Chloe’s dad walk out that door, knowing he is going to die and that Chloe is going to lose the father that she loves so dearly, was devastating.  What Life is Strange does better than anything is allowing you to connect with these characters, so that when something awful or joyous happens, we get those emotions as well. They had me wrapped around their little finger.

Perhaps I am just unobservant or slow on the uptake, but the twist with Jefferson being the psychopath surprised me.  I was absolutely sold on the idea that Nathan was behind the disappearance of Rachel and what had happened to Kate Marsh, and while that isn’t necessarily wrong, I didn’t expect Jefferson to be the brains behind the operation.  He is truly a despicable character.

That first lecture of his in class takes on a whole new meaning once you learn his true nature.  “I could frame any one of you in a dark corner, and capture you in a moment of desperation. And any of you could do that to me. Isn’t that too easy? Too obvious?”.  So obvious!  Yet, it’s an example of beautiful writing.  All of the clues are there; it’s up to us to put the pieces together and I didn’t, hence my surprise.

The soundtrack, featuring both original and licensed content, is phenomenal.  The melodic guitar that plays as the backdrop for most of the narrative is beautiful and gives us the chance to connect with where the game wants us to be emotionally.  Its melancholic vibe perfectly fits the tone of the story.  The licensed tracks are well thought out and implemented, as well.  The prominent example in my mind is Spanish Sahara by Foals, which plays after you decide to sacrifice Chloe to fix the world.  Its slow and sad sound blended perfectly with the guilt that I felt for going back and choosing to sacrifice her.  I enjoyed the music so much, that I bought the PS4 Limited Edition that comes with the complete soundtrack! Choice based games of this caliber are few and far between.  I hope that with the success that has come with Life is Strange, we will get to see more games of this style emerge.

Life is Strange 2 seems to have been confirmed through comments from one of the co-founders of Dontnod during an interview, and I eagerly await any and all news about this sequel!

Now that I’ve said my piece, it’s time for you to say yours!  What decisions did you make?  What are your favorite parts of the game?  What did you think of the ending?  Let me know in the comments below!

Review: The Boy and The Beast