Going into the theater to see The Boy and The Beast, I knew nothing about the premise other than what appeared on the promotional image for the movie.  It would be about a boy and a beast; a crossing of two worlds.  I also had my knowledge of Mamoru Hosoda’s previous works (Summer Wars, Wolf Children), to draw from as well. What he is known for from those films, is that he puts an emphasis on family and what it means to be a family and how those relationships work.

It should come as no surprise then that The Boy and The Beast tackles this very same theme.

Kyuta runs away from home after his mother’s passing and is living on the streets with just pocket change to spare, when he encounters a large walking bear named Kumatetsu, who tells him to follow him and become his pupil. One thing leads to another and Kyuta finds his way into the parallel world that Kumatetsu hails from.  From there we get the story of the relationship between the two and how they form a seemingly contentious bond.  There is certainly more to the story beyond what has been mentioned, and it’s a beautiful depiction of how “family” isn’t defined by blood.

I’ll be honest, I didn’t like Kyuta much at first.  He’s defiant and bratty and a seeming pain in the rear.  That’s exactly what they were going for, though, and they succeeded in making him as annoying as possible. Kumatetsu is stubborn and loud, leading to a lot of friction between him and Kyuta.  As they progress in their relationship, though, the dynamic between them shifts from antagonistic to competitive.  There is some great humor in the interactions between the two, often involving a chase of some sort.  I loved Kaede’s character as Kyuta’s love interest. She’s bookish, shy and cute, but also strong.  I also loved the monk Hyakushubou, as he often played the voice of reason and was a good source of guidance for Kyuta. 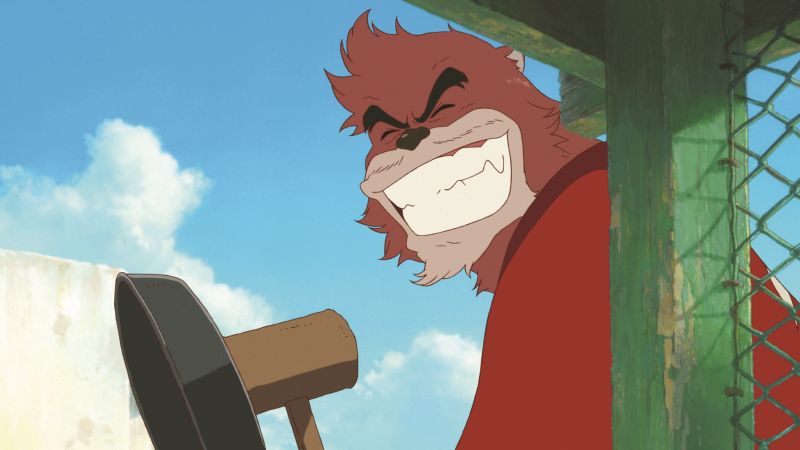 While the story is overall an enjoyable experience, there are minor things here and there that should be mentioned.  At times the narrative seems to lack cohesiveness in tone and direction.  There is a point where Kyuta returns to his world, and while I found the story to be enjoyable during that part of the film, it seemed to come out of nowhere and left me slightly confused as to where this story was trying to go. I was pleasantly surprised by the appearance of a little bit of romance when we meet Kaede.  The calm and cute dynamic between her and Kyuta provides a nice tonal balance to the fiery and physical relationship between Kyuta and Kumatetsu.

Visually, the movie is gorgeous.  Hosoda has a distinct style in both character designs and set pieces that he maintains in this film.  There is also a subtle use of 3D that helps give a lot of the panning shots and crowd shots, a realer sense of depth.  The animation is smooth and shows off right from the get go as a narrator paints a picture of where the story sets off.  The fire effects and character motion when performing the martial arts during this segment is fluid and beautiful.

Animated films are a difficult medium to produce.  They often aren’t given enough time or budget or care, but select directors, like Hosoda and Shinkai and anything Ghibli, are able to create these beautiful, memorable stories.  The Boy and The Beast, with its beautiful visuals, relatable themes, and solid story will be chalked up as another success from Mamoru Hosoda, and I look forward to watching it again!

We Want You… to help out Aqours!