*This review has spoilers! You’ve been warned! 😉 *

Anthem of the Heart tells the story of a girl named Jun Naruse who inadvertently destroys her parents marriage and home life. She is then approached by a mysterious egg that informs her that her words will cause her nothing but pain in the future. The egg offers to help her to avoid this and casts a curse to seal her lips. Fast-forward to high school and we see that while she can still speak, every time that she tries to, she gets a crippling stomachache.

Jun gets picked along with Takumi Sakagami, Natsuki Nito, and Daiki Tasaki to head their classes community outreach program. All four of them have various reasons for not wanting to be a part of this, but they eventually all agree to perform a musical to help Jun regain her voice.

The characters in this film are distinct and deep. At a glance one would think that they fall into the typical tropes of this kind of story (ie. The lazy MC, popular cheerleader, shy girl, dumb jock), but as the film goes on, their depth becomes more and more impressive. I found Jun’s character to be particularly interesting, since for the most part her character doesn’t talk. She does a lot of communication via text, but she is equally as proficient in communicating through her mannerisms and actions. The way that they are able to communicate emotion through her character was fantastic.

Daiki’s progression throughout the film is also impressive. He starts out as your typical arrogant single-minded jock, but as he interacts with the other characters and opens up to them, he becomes the strength of the group.

I felt anger when the father nonchalantly places the blame on Jun for his reprehensible actions. You truly have to be the scum of the earth to cheat on your wife and then blame your child for getting you kicked out of the house. This is the catalyst for Jun having her words sealed away and I can’t help but wonder if this is some sort of commentary on Japanese culture when it comes to rocking the boat. I felt frustration when we see Jun’s mom reprimand her for answering the door since she doesn’t talk and the “neighbors are talking”. Granted, her mother’s life hasn’t been an easy one. Her husband cheated on her, her daughter stopped talking, and she has to work long hours at an unfulfilling job to provide for the two of them. She probably doesn’t have anywhere or anything to take her frustrations out on, and so she unintentionally hurts Jun with her words. 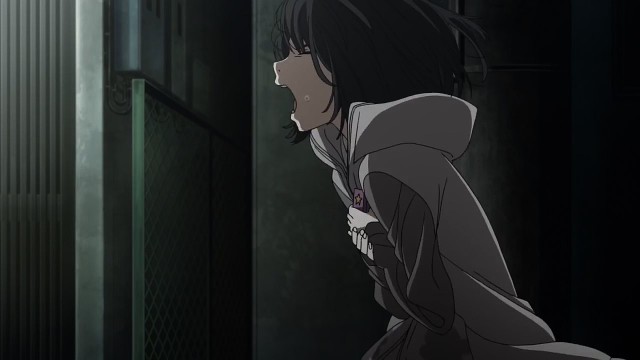 I felt a weird mix of happiness and sadness when Jun makes it to the performance and begins singing. The scene is so incredibly beautiful. Her voice is gorgeous and hearing it hits you right in the feels. What really got me though was as she is walking by her mom as she sings these lyrics straight from her heart, and her mom instantly realizes the meaning behind the words and starts to cry. Let the tears flow! Her realization that the egg had been a figment of her imagination, a way for her to cope with the blame and stress of her situation, was equal parts sad and relieving. Sad because those emotions that she had been shielding herself from could no longer be avoided, but relieving to know that she isn’t a cursed soul who can never talk again.  Coming to terms with the fact that she inadvertently destroyed her parents marriage had to be a hard thing to do, but taking that step made her a stronger person. I loved the scene in the castle between Jun and Takumi as he helps her realize that while words can certainly be harmful and used to cause pain, they are also beautiful and can bring happiness. When she said the mean things to Takumi, I couldn’t help but smile and feel relief that she was voicing her heart.

An aspect of this film that I really enjoyed was how they handled the romantic side of things. I was totally expecting the typical “main guy gets with main girl and childhood friend gets nothing” story, but they subverted those expectations. I like that Takumi and Natsuki realize the mistakes that they made in their previous ambiguous relationship and want to make things right. I also really liked that Daiki ends up confessing to Jun. It was a nice piece of character development that is not often seen, especially in film form. I do wish that we would have received a more concrete view of how things turn out for everyone, but it isn’t wholly necessary and it didn’t detract from my enjoyment. Visually, the movie looks great. Some of the character designs seem a little plain, but that plainness only enhances changes that happen later on. The animation was fluid and the backgrounds were colorful and beautiful. The music for Anthem of the Heart was phenomenal. There were some easily recognizable licensed tracks (like ‘Over the Rainbow’ by Judy Garland) as well as original pieces that were a joy to listen to. The song at the end of the performance in the film gave me chills with its complexity and tone. The emotion behind the music and the lyrics make me feel, and for me, that is the sign of good music.

(Serious spoilers in the video!)

Words are a powerful thing and I believe that Anthem of the Heart did a fantastic job of showing both the good and the bad when it comes to using words. Speaking from the heart can be scary and can result in pain, but it can also result in inexplicable happiness. TL;DR: Anthem of the Heart is a fantastic film about the power of words and expressing yourself. It looks, beautiful, has an incredible soundtrack, and hits the right notes emotionally.  Absolutely check this one out!

Recommended Audience: Anyone and everyone. Nothing explicitly sexual, no foul language and no violence. The only thing that will get wrecked are your emotions.

Anthem of the Heart can be purchased on Rightstuf and Amazon Japan!